You are here: Home › About us › Buddha and his teachings 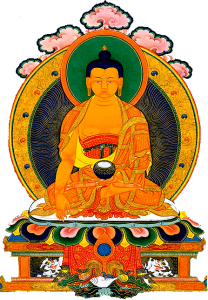 The Buddha was born in the 6th century B.C.E.  in the northern kingdom of Sakya in India, as prince Siddharta Gautama.At the age of 35 years he obtained full enlightenment and became known as the Buddha – the Awakened One.

The Buddha realized that it is the natural wish of all sentient beings to obtain happiness and avoid suffering. On the basis of this understanding he taught the ‚Four Noble Truths‘, which expound the relation between cause and effect of happiness and suffering. The aim of all words the Buddha spoke and all the commentaries of Buddhist masters is, to support all beings in their development of wisdom and compassion and to thereby realize their wish for happiness.

The buddhist teachings are very comprehensive and profound. The Buddha summarized the essence of these teachings in the following four lines:

Commit no unwholesome deeds whatsoever.
Practice virtuous conduct extensively.
Tame your mind.
This is the essence of the Buddha’s Teaching.

Later, these precious teachings of Buddha Shakyamuni spread into many countries. The buddhist teachings reached Tibet in the 7th century through the Dharma King Trisong Detsen, who invited both the Indian Masters Padmasambha and Shantarakshita.