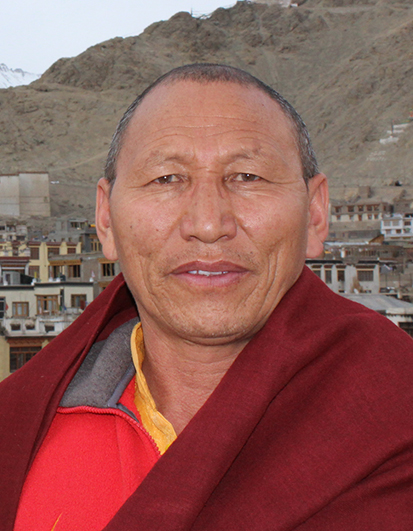 Venerable Lopon Dhundup Sonam is one of the most influential Drikung Kagyu senior monks in Ladakh. He joined the Sharchukhul monastery at a very young age, and since then he studies and practices Buddhism. He is a very renowned and celebrated contemporary Thangka artist within the Drikung Kagyu tradition. His teacher, the national Buddhist artist Mr. Tsering Wangdus, was awarded the honor of Padma Shree by the Government of India for his refined skills in Thangka Painting in 1999. Lopon Dhundup Sonam is considered to be one of the pioneers in Ladakh and he contributed significantly to the refinement of Thangka painting within the Drikung Kagyu tradition. Recently he published a new book on the special techniques of this ancient art, under the guidance of HH Drikung Kyabgon Chetsang. Currently, Lopon Dhundup Sonam is the head of Shachukul monastery. 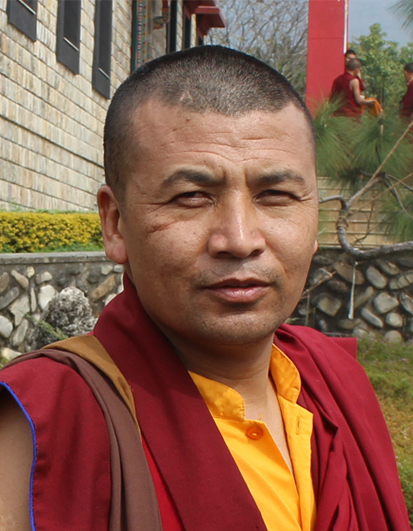 Venerable Lama Konchok Gyaltsen was taught the rituals of the Drikung Kagyu tradition from a very early age. He completed his Acharya (M.A) in Buddhist Studies at the Central Institute of Buddhist Studies in Choglamsar in 2008. He is the first monk ever to hold the Acharya degree from an officially recognized institute, therefore becoming a source of inspiration for the young monks of Sharchukhul monastery. He is a founding member of the Ladakh Drayang Organization which aims at promoting education and the preservation of the Ladakhi culture and its environment. His kindness and cooperative skills allow him to engage successfully in the promotion of a healthy and stable environment in Ladakh. Currently, he is a very active member of the Sharchukhul monastery where he holds the position of the general secretary as well as the position of a board member of the “Go-green Go-organic” project, which was initiated by HH Drikung Kyabgon Chetsang. 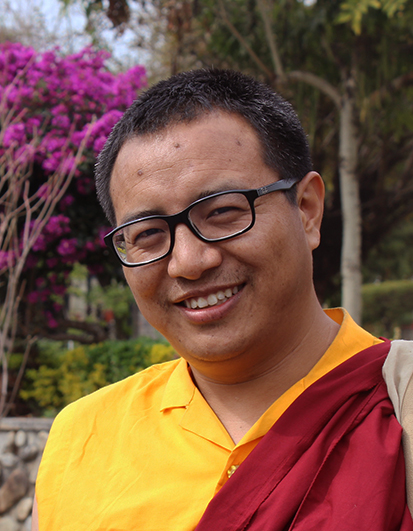 Venerable Lama Tashi Dorje received training in Tibetan Buddhist rituals of the Drikung Kagyu tradition in Sharchukhul monastery at a young age. He studied basic modern subjects such as maths and science at the Central Institute of Buddhist Studies, Choglamsar, up to the 9th grade. Subsequently he joined the Central University of Tibetan studies for further studies and completed his Shastri (B.A) in Buddhist philosophy. He expanded his studies within the domain of philosophy by studying western philosophy as well. After completing his M.A. in comparative philosophy in 2011 at the Pune University, he was admitted at the Delhi University for his research in philosophy where he completed his M.Phil (Master of Philosophy) in 2013. He wrote his dissertation on “A Study of Two Truths in Prasangika Madhyamaka with Special Reference to Candrakriti’s Madhyamakavatara”. In 2012, Tashi Dorje successfully sat the exams of the UGC (University Grants Commission) and of the NET (National Eligibility Test) which render him eligible to lecture on Philosophy at universities throughout India. He has taught Philosophy as an assistant professor at Miranda House in Delhi University as well as Buddhist Philosophy and Religion at the Mewar University in India. Currently he works as a research scholar at the University of Delhi. His PhD thesis examines the issue of ‘An Analysis of Ratna Sri’s Quest of Reality’. 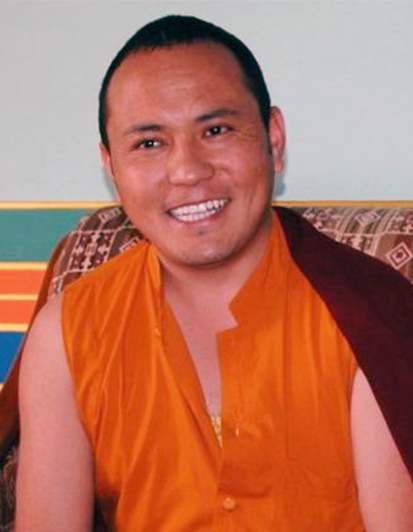 Venerable Lama Phuntsog Gyaltsen is one of the most educated monks of the Sharchukhul monastery, where he completed his basic education. In 1998 he joined the Drikung Kagyu Institute in Dheradun for further studies on Buddhist philosophy. Upon his graduation from this Institute, he was appointed as an assistant Khenpo (Lecturer) at the Kagyu College at 2010, before he was offered a teaching position of Philosophy for young monks at the Drikung Kagyu Rinchen Ling Monastery in Nepal. Currently he works as the coordinator of the Thangka Project for Sharchukhul monastery. Phuntsog Gyaltsen is an expert in Traditional Tibetan Calligraphy and is known to undertake his tasks in a serious and reliable manner. He is also known to engage into interpersonal activities demonstrating a spirit of cooperation. 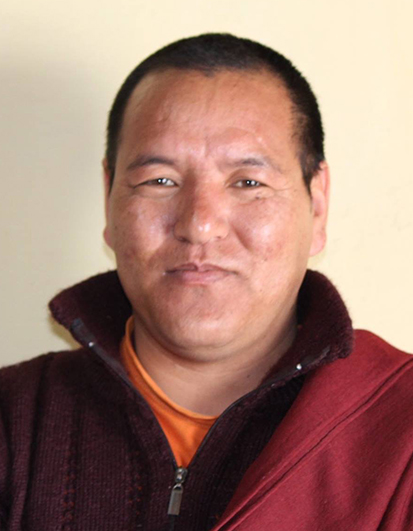 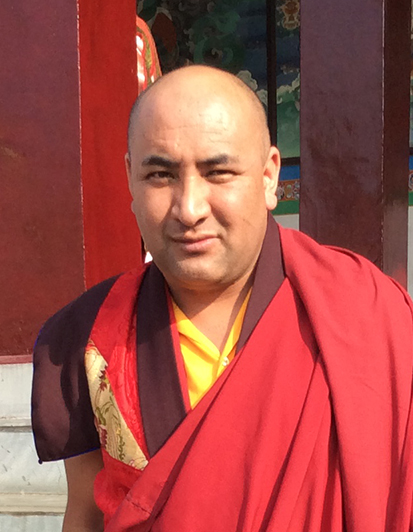 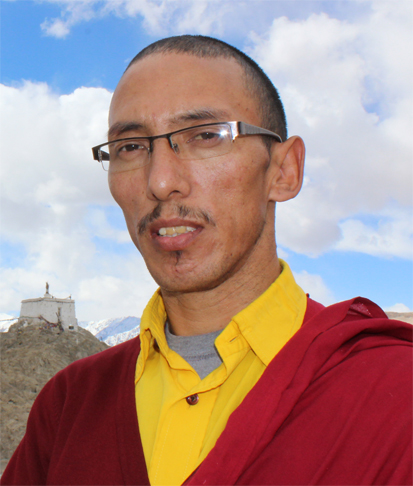 Venerable Lama Konchok Sherab completed his basic education at Sharchukhul monastery. He was keen in learning traditional Tibetan Thangka painting, sculpturing statues etc. He was taught these traditional arts by various well-known and famous artists of Ladakh. He is very well known for his artistic skills among young monks of his monastery. Currently, he is occupied with painting Thangkas in many temples and monasteries. 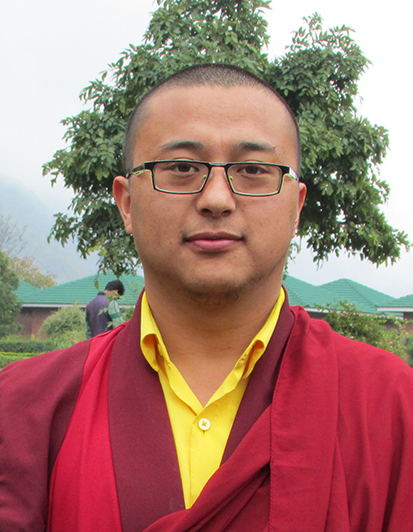 Venerable Lama Tsetan Gyurmet  is one of the younger monks of Sharchukhul monastery. He completed his basic education on the traditional Buddhist rituals at the same monastery at a very young age. His interest in studying Buddhist philosophy and logic brought him to the Kagyu College in 2002. He currently teaches Buddhist Philosophy as an assistant Khenpo (Tutor), while working on completing his studies at the same college in 2015. 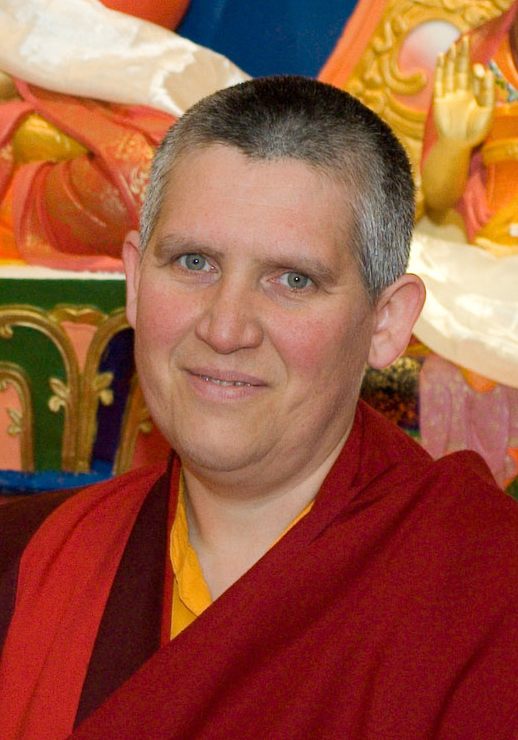 Konchok Tsechö (Sabine Tsering) is the resident nun at the Buddhist community Dharmakirti in Heuchelheim. She came in contact with the Buddhist teachings in 1981. Konchok Tsechö received teachings and transmissions from different teachers, in particular from the Drikung Kagyu tradition and was ordained as a Buddhist nun in the year 2000. For many years she offers courses on the fundamentals of Buddhist teachings and meditation and is involved in various social projects.